Brand Map: The Branded Provinces (and Territories) of Canada


I love hearing from my former Brand Mangement students.


A few weeks ago, a one of them, Charlie, sent me a blog post that he came across: “The Corporate States of America”. He wrote,

“Bob, I hope your summer is going well. I was on my company’s internal branding page this morning, and I came across this posting which I thought was kind of fun! It’s not official in any way, but I want to believe the guy who made this put SOME thought into it. Then I realized I wouldn’t even know where to begin with making this map for Canada. Do the Territories even have brands??”

Well Charlie, this is your lucky day. Working with the team at Integrated Brands, we developed a distinctly Oh Canada map we call “The Canadian Brand Map: The Branded Provinces and Territories of Canada”.   But before we get there, let’s make a few observations on the American version.

The Corporate States of America 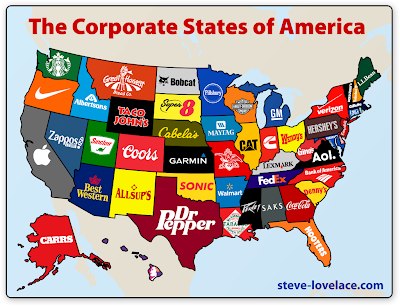 Lovelace, blogger and creator of the Corporate States of America used the following criteria: a brand that a) has ties to that state and b) is still in business.

Some of his selections are controversial, as is evidenced by many the 295 comments at the end of the blog post. A quick study reveals that some heavy-weight brands like Disney, McDonalds, Exxon, KFC, and Microsoft have been shunned for Hooters, Caterpillar, Dr.Pepper, Lexmark and Starbucks in Florida, Illinois, Texas, Kentucky and Washington respectively. As the author readily admits, it’s a subjective map not a scientific one. But, these brands have real social and economic impact where they operate. Each brand represents thousands (sometimes hundreds of thousands) of reliable jobs, stable investments, and millions in tax revenues. 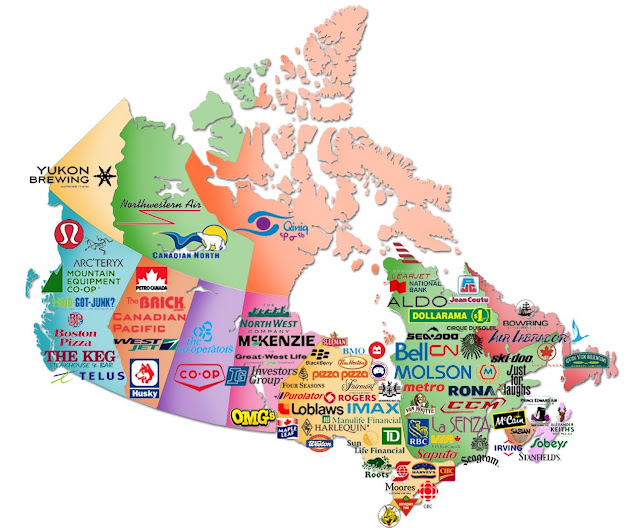 So what made the list? Brands that satisfied these criteria.

1.       The brand needed its head office to be in a Canadian province/territory. As a result, Thompson-Reuters (which has deep Canadian roots) was cut because its head office sailed off to New York. Molson-Coors, on the other hand, made the map.

2.      The brand required a business-to-consumer orientation. So, heavy-industry brands like Resolute Forest Products and Potash Corp weren’t eligible. Some decisions got a little murkier so we teased out relevant sub-brands from the corporate parent. For example, we excluded the Bombardier brand (oriented towards planes and trains) but included their consumer-marketed sub-brands (e.g. Sea-Doo). CN also made the cut because of its ongoing branding related to consumers (e.g. CN Tower).

3.       The brand needed significant brand awareness nationally, regionally, or both- and be in the collective consciousness of the region. Obviously, this has subjectivity to it- but talking about the blog post to residents of various provinces and territories returned the same brands over and over. In a way this was a quick-and-dirty awareness recall test.  Our final list also passed the sniff-test of a team of a 5 Canadian branding/advertising professionals and marketing professors.

4.       The brand required distribution of goods/services beyond that of its home province/territory.

When all the brands are plotted on a map like this, there are lots of insights to be had. There’s the “ohhhh I didn’t know that brand was a Canadian brand.” I’d be curious to know what percentage of the population knew that Sabian Symbols or Harlequin Romance stories were brand babies from north of the 49th parallel.

The map also tells a richer story about regional values. Take a look at the Brand Map again. The brands tend to reflect the values of the regions that they come from.  British Columbia is stereotypically Canada’s balanced-lifestyle, rugged environmental, and hippy meets granola province. Not surprisingly, then it homes one of the world’s premiere well-being brands (Lululemon) and two of Canada’s rugged outdoorsy nature brands (Arc’teryx, Mountain Equipment Co-Op).

At the other end of the country, the province of Quebec inherited a lot of associations from its parent country (France). France’s  imagery relates to hedonic pleasures. The French are synonymous with good times rather than work. Passionate l’amour, fashion and fine alcohols are staples in stereotype Frenchland. It make sense then, that Canada’s sexiest brand (La Senza), major cheese player (Saputo),and “good times” recreational brands Sea Doo, Ski Doo, Just for Laughs, Cirque du Soleil, and Seagrams come from la belle province.

Let’s  shift to Saskatchewan. Saskatchewan is Canada’s collectivist province. It is the birthplace of Medicare in Canada and housed the first openly socialist regional government in Canada. No surprise here that the values spawn coop organizations.

There is one final point I’d like to make before signing off today. While the brands draw values from the region, they also give back. As the thousands of Canadians (sometimes tens of thousands) who work for these brands have reliable jobs, they are being inundated with the values of the brand on a daily basis. As the brand expands, so too do the ideals from the brand.  You might say, Canada’s gotten a little more "well-being" thanks to Lulu’s out there- and is a little more connected thanks to Air Canada’s and Tim’s.

Posted by Robert Mackalski at 2:43 PM