Brand Lovers and Haters part 2: The Wrath of the Hater

While in San Francisco to attend the American Marketing Association conference, I stopped in to a souvenir shop on the wharf to inquire about directions to a nearby supermarket. The employ said, "There are two supermarkets around here. Both are about 4 blocks away. Safeway and Trader Joe's." Another shopper who had overheard our conversation blurted, "Don't go to Trader Joe's. They suck. Bad selection. They support fringe political agendas. I hate them." I had come across a self-professed brand hater.

Brand haters are the exact opposite of brand lovers. The won't buy the brand (or will do so very unwillingly) and go out of their way to disrupt brand building activities. They talk against the brand to family, friends, strangers, or anyone who will listen. Sometimes their efforts are organized and can lay a powerful punch to an organization; sometimes they are not. Some efforts are legit (think PETA on KFC cruelty to chickens); some are not (think rumors on the P&G being satanic propagated by Amway representatives). But haters have to be handled carefully especially given new technologies and social networks that make hater-activities easier, more sophisticated, faster, and effective. Since hater activities (negative blogging, writing scolding brand reviews, organizing boycotts etc.) are increasingly easier to do, there are more and more of these activities. With every "hating activity" the hater becomes more committed to the hate position- and the more hate positions that are out there can also translate into the position being further legitimized. The result: a group of entrenched, motivated haters.

Let's look at some hater stories and their weapons of choice:

Briefly, Thomas Hawk was shopping for a camera, found what seemed like a great deal, and tried to place an order. The company pulled some nasty stuff on him. Rather than just take it, Hawk wrote a detailed post to his blog. The post got picked up by a few other blogs and community and Internet news sites, and the whole thing absolutely erupted. There were reports people were constantly calling PriceRitePhoto to tie up their phones in support of Hawk. Hackers attacked the site. Consumers rallied and went on a rampage. They ultimately got PriceRitePhoto removed from PriceGrabber, CNET, and Yahoo! Shopping.

Then, PriceRitePhoto changed their name. Hawk busted them again by posting the new name to his blog. The story was picked up by "New York Post," Forbes.com, and "The New York Times." Hawk had e-mail exchanges with the Better Business Bureau and the New York Attorney General's office.

The result? PriceRitePhotophoto.com doesn't seem to be live any more. It seems that Hawk chased the company into oblivion.

How full of rage do you have to be to steal bullets from your government, fire an automatic weapon on a printer, film it, put it on YouTube, and risk upsetting your Sargent? 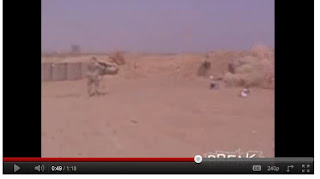 That's what happened in the video above, which made the viral rounds. It features a disgruntled U.S. Marine based in Iraq who is infuriated by HP's demands to be paid for consultation on how to fix his inoperable HP printer. So, he opens fire with his Uncle Sam issued weapon and blasts the printer to bits. HP spent lots of time and effort diffusing the viral video - including posting up this marketing department scripted response video. (Just think of the effort HP went through to get to this point). But no matter how marketing likes to spin it ("we are that much better now...", the trouble with haters, is that there is no upside. It's never pleasant to be forced to pay to neutralize bad things.

A lot of haters are willing to go beyond what is rational to get some brand retribution. Some haters develop brand hate sites - and the best ones can get ranked by international press. Think of it, some haters are disgruntled enough to buy a domain name like McSucks.com, Screw-Paypay.com or Verizonpathetic.com, pay money for hosting, and invest time and effort in generating ongoing content. Some sites have gotten pretty sophisticated over the years. This means that the brand hate site gets high search engine rankings and visibility. If you are a brand manager of Bell Canada for example and search a Bell related term, there is a non-trivial chance that one of these sites pop up. Try Google searching "Bell Canada sucks." You'll get close to 11,000,000 returns for the regional Canadian brand. That's more than the 9.2 million returns that the international brand McDonald's gets. There are clearly a lot haters out there. (click to enlarge Google image below) 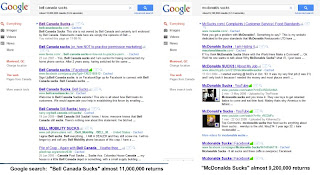 Do you really control your logo? 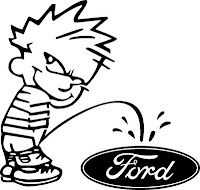 If you are a brand manager, here is some food for thought: In the USA, the 1st Amendment shields the operators of brand hate sites from liability, unless they are selling products, deriving advertising revenue and/or in some other way engaged in "commercial" speech. If the brand hate site is strictly non-commercial in nature, the operator's freedom of speech will generally override the trademark owner's interest in controlling the use of its company name or trademark. So images like the one you see on the left are, broadly speaking, protected as free speech. Of course, well financed corporations can initiate legal threats to have their brand elements (logo, characters etc) removed. But sometimes haters take on the challenge in court, and unless they are benefiting financially from the corporate hate site, they generally win. (click here for some more thorough explanations and court case precedents)

But some of the most interesting hater stories are old school tactics. The Net is loaded with stories like this next one.

One woman hated her bank after it wrongfully bounced a bunch of her cheques. The bank reps were highly uncooperative and refused to take off $200 in fees. In typical hater fashion, she was going to abandon the bank but hesitated because she wanted revenge. She publicized her saga, and got vengeful. Since she had free check cashing, she started writing cheques out for "CASH" for one penny. She wrote 500 cheques and sent her obliging friends to cash them at the various branches. Eventually the bank called her to stop, paid her $200 in fees back- but only after the bank spent hundreds and hundreds of dollars processing cheques. In a follow-up to the story, she withdrew all of her money from the bank except $100 so she could continue to be a thorn in the side of the bank. She's learned to love hating her bank brand.

In some of my research on haters, I spoke with a man was dissatisfied with the way his telecom brand was sending him unexpected charges. Antagonized by this, he paid off all of his account except for $50, signed up with another carrier, and began his retribution campaign. When the call center began calling for late payment on the $50, he asked to organize an installment plan to pay off the bill. Of course, the call center employees did not understand how to deal with this- and his installment request made its way to middle management. Through a negotiation with the manager, $3.50 was the monthly amount agreed upon. But then he started sending cheques for $3.505 (that's right, half cent amounts on the cheques). None of his cheques have been cashed because the half cent messes up the accounting balance. But think of how this hater has cost the brand money. It straddles many departments- call center, accounts payable, management, accounting- and there is zero upside with this customer. From a hater perspective, this is "checque-mate".

I started this blog by saying how the web and social media have made it easier for brand haters to engage in the their brand hater activities. It took me about 5 minutes to find the above examples. There are just so many of them. Many of them are effective. This brand hater world is the new reality of branding and few managers know how to deal with them. This is why I've dedicated a good chunk of my research in this area.

Posted by Robert Mackalski at 11:40 PM No comments: