Is Sobeys the Safeway?

If you've followed this blog, you'll know that I have a soft spot for the grocery industry. It's the industry where I got my start. I pushed carts, stocked shelves, bagged groceries (and had a few crushes on cashiers in the process), received stock on pallets, ordered for the store, and eventually- at least for a while- managed the dairy section. IGA (Sobey's) was my employer and I was an IGA man through and through. Safeway and Loblaws were my sworn enemies. I was proud to work for IGA and today, I still have my 5 year pin and IGA tie in my treasure box.

So, whenever I see headlines about grocers I get excited. When the topic involves branding and groceries, I get very excited.

CTV News:  "Marc Poulin, president and chief executive of Sobeys Inc., said the company is not sure whether it will be re-branding the Safeway stores."

CBC News: "Unclear if dominant brand will be Safeway of Sobeys...Empire (parent of Sobeys) has not yet decided whether it will brand the new network of stores under the Safeway or Sobeys banner or keep the two brands independent."

It is easy to see why Sobey's would want to purchase Safeway Canada. The two companies compliment one another strategically. Safeway Canada is strong is western Canada with 213 stores while Sobey's is prominent in Ontario (98 stores) and Atlantic Canada (85 stores).  (Sobey's banner only waves on 36 locations in Western Canada.) Empire, the parent of Sobeys also has intense Eastern Canadian presence with 107 Foodland banners in Ontario, and 276 IGA branded stores in Quebec). In short, Sobey's and company are weak in the west where Safeway is strong. Also, when the revenues of Sobeys corporate ($16B) and Safeway Canada ($6.7B) are aggregated, it gets them a lot closer to Canada's revenue leader Loblaws ( $32B.)


I can see it now. The Sobey's boardroom is going to have a lot of interesting conversations related to brands and branding of its banners. Some will argue strongly in favor of a single Sobey's brands. Most of these arguements will stem from cost-savings and operations: there are economies of scale in marketing and advertising using one banner versus two; private label labels can be stream-lined under a single branded Sobeys banner (which has production and logistical advantages); management would be more top-heavy with 2 banners; efficiencies and better data through a single integrated loyalty program (Safeway and Sobeys have different loyalty programs now); exciting to have the industry flagship banner "Sobeys" ...

These are all really good arguments.  But, it takes a marketer to bring the customer back into focus. And, those arguments need to be reminded that it is consumers who ultimately own the brand and the banners.

A starting point for me here would be Brand Mojo which has been tracking grocery banners for 4 years.  I've extracted some data to look at this case: Sobey's or Safeway banner.

On the surface, it would appear that both banners are equal, at least from an average rating point of view. 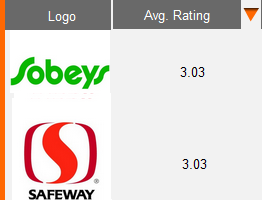 But, when we dig a little deeper into the hundreds of Canadian ratings on the two brands, and examine the ratios of lovers versus haters, we see some interesting information. 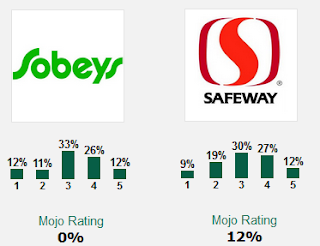 Safeway and Sobeys have similar numbers of lovers, but Sobeys has picked up more "haters". That's a "stick" to keep away from the Sobeys name in the decision.

Making the branded banner decision is a big one. But the Brand Mojo tracking suggests that there is a lot more to consider than the cost and operational savings.